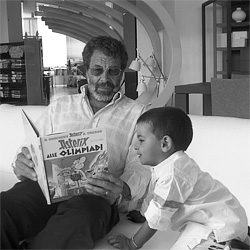 1946 was a difficult year for post-war Italy, struck by famine, an economy on its knees, supported only by the aid coming from the other side of the Atlantic. This is also the year in which we started from scratch, to rebuild what had been lost, some went back to farming. Francesco Vigo, began cultivating some plots of land in the Albenga plain, to grow some vegetables.

Soon the size of those plots proved to be inadequate for his ambitions and his desire to work, as in the meanwhile his family had grown with the birth of Gerolamo. It was his son who in 1974, purchased his first hectare of land and started growing pot plants, an activity that soon became the company’s main business. By the end if the ‘80s, Gerolamo Vigo had bought 2 hectares of land, therefore increasing profits. During these years the company enhanced its quality by introducing the first, highly technological and innovative greenhouses. In 1988 the Vigo Gerolamo firm was extended to reach 8 hectares, and can now rightly rank among the top, most important companies in the agricultural sector in this plain. In 2000 Gerolamo Vigo’s children, Francesca, Paolo and Roberto, joined in the management of the company, making considerable contributions to this “third-generation company” in the production, marketing and administrative sectors. And this one-man business “Vigo Gerolamo”, in the meanwhile continues expanding in the lands included between the Camporette and Poggi Villadoria area, reaching the current 16 hectares, and including both greenhouse and open field cultivation.